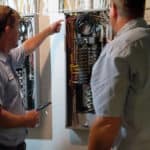 Electrical panels do not last forever.  Heat runs through the connections all day and night, causing them to wear out over time.  If your electrical panel is more than 20 years old, it could be a fire hazard that can threaten the safety of your home and family.  Older panels have breakers that fail over time and will not trip as needed.
One of the most common causes of residential fires are worn out electrical panels. According to the National Fire Protection Association:

Arc flashes commonly occur in electrical panels. Arcing occurs when one of an electrical panel’s many circuits becomes overloaded and overheats. Once damaged, a circuit breaker can malfunction and continue to let electricity through, potentially causing arcing and the possibility of a fire.

Codes Change for a Reason:  Get Rid of Outdated Panels

Older homes are more likely to have outdated electrical panels that are extremely unsafe and no longer meet codes for residential safety.  If you own home built before 1990, you might have one of these outdated main electric panels boxes in your home.  These unsafe panels include:
Federal Pacific Electric (FPE) Panels – FPE panels are most common in homes built between 1950 and 1980. Federal Pacific Electric will likely be written on the cover of your breaker box. Inside, look for the name Stab-Loc (the brand name of the circuit breakers).  FPE electric panels’ circuit breakers fail to trip when they should, leading to thousands of fires in the United States.  FPE is the only manufacturer to be forced into bankruptcy due to liability associated with home fires.
Zinsco Panels – Zinsco or GTE-Sylvania panels were popular electrical panels installed in homes throughout the 1970s.  The circuit breakers inside many Zinsco panels melt to the main bus bar. This means the breaker won’t ever trip, even when there’s a short or overloaded circuit. So, if there ever is a short, or other problems, the surge of power melts wires and starts a fire in your home.
Split-Bus Electrical Panels – Split-bus breakers are divided into 2 groups with no single disconnect breaker.  Because these panels have not been used for over 40 years, they are unsafe because of their age.
Fuse-Box – Screw-in Fuse boxes are old electrical panels that use fuses instead of switches.  These boxes typically use too few circuits, so circuits are tripped often, causing homeowners to replace fuses with larger amped fuses, or worse yet, a metal object like a penny.

So you finally installed those extra outdoor outlets, a new ceiling fan in the guest room, and a freezer in the garage to store your extra food… and now you are saving up money to install that hot tub outside.  Stop right there; the more appliances, outlets and fixtures you have in your home, the bigger the electrical panel you need.
Electrical panels come in different amp loads, and the more your electrical needs, the bigger the amp load you need.  Plus, the more appliances, fixtures, and outlets you have, the more switches you need to hold them.  If your electrical panel is full, it will get hotter and be more of a fire risk.  Replace full panels with larger ones that can better handle your current load plus your home’s future electrical needs.

Don’t DIY on This One – Call us Today

While we encourage you to learn as much about your electrical system as possible, electricity is not a good candidate for a DIY project. DIY wiring is not only dangerous, it seldom meets codes and can be far more costly to repair in the future.  Anthony PHCE’s licensed and trained electricians provide you with the best service, electrical solutions and advice.  Call our Anthony PHCE electricians today at A-N-T-H-O-N-Y 268-4669 (913) or (816).